Order via the email:  anzukbook@bigpond.com 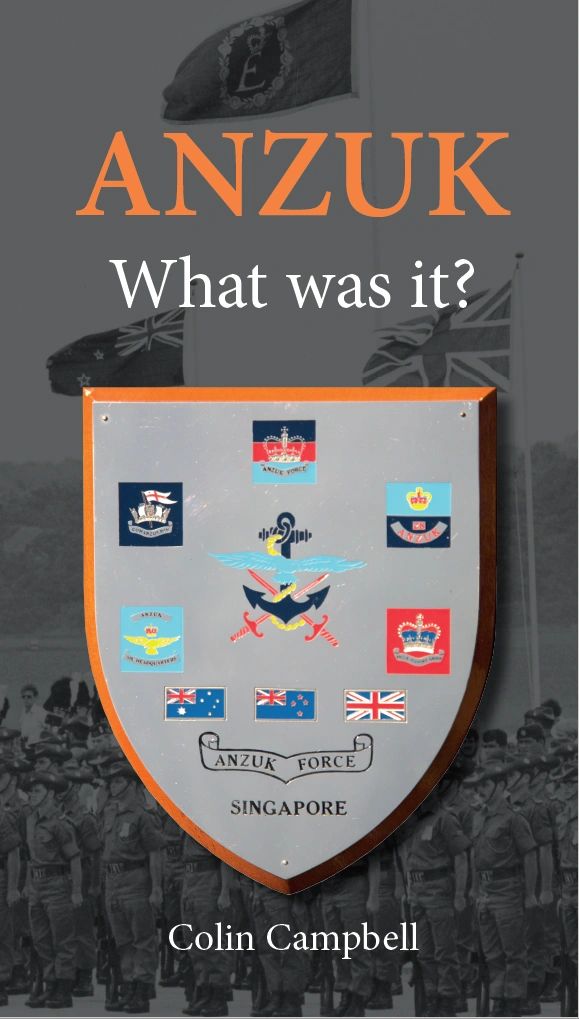 Ideal for libraries and Universities and locations with a high volume of readers.

For individuals who are interested in foreign affairs and military history of Australia, New Zealand and the United Kingdom.

"ANZUK What was it?" will appeal to both those who served in ANZUK Force in the early 1970s, and to a wider public interested in foreign affairs and the military history of Australia, New Zealand and the United Kingdom.  Formed after the United Kingdom withdrew her forces from east of the Suez, the multinational tri-Service ANZUK force was based in Singapore and tasked with assisting in the defence of the Asia Pacific region. Colin Campbell has researched widely, and it shows.  Richly illustrated with photographs from the time, and backed by interviews with those who were there, it is a wonderful history in its most readable form."

It is not often that a New Zealander is voluntarily offered the opportunity to comment on an Australian's literary effort! This is one of those opportunities when however, while taken with alacrity, content worth transcends any Trans Tasman rivalry.

This story needs to be recorded before being lost in the contemporary welter of Timor, Kosovo, Afghanistan and the Gulf stories, now high in the public consciousness.

I always look first in any book and now especially when reviewing, at the sources and/or the index. They are generally a reflection of the scholarship of the writer. In the ANZUK Story, with six pages of sources acknowledged and a twenty page index, these are the hallmarks of a well researched and compiled publication. Just to be certain however I took a representative number of subjects/names from the Index and checked them with the appropriate place in the text. It may seem a mechanical exercise but it is surprising how, in some publications, elementary errors occur through poor editing. None were apparent. The sources, in particular, are well documented and confirm the quality of the research.

It was a fair acknowledgement however of our (New Zealand) worth to hold some of the senior positions in the organisation. In this respect the author is, quite properly, even handed in his coverage and occasionally, by implication, his assessment of the senior appointments in the Force.

The book is also noteworthy for the extent and quality of the photographs. They cover every aspect of force activity from the compulsory group photos  through national activities and personalities to family and recreational images. They form an important record and in their extent they are, as is often said, worth a thousand words!

This is a story that needs to be told. It is not the stuff of popular histories nor of rivetting human interest. It is however a readable record of an important, but short lived three nation force at the butt end of the centuries long British involvement in the area. It will be an important source in the future for the military, military historians, and for dependants of those who served in the ANZUK Force and need to recall the uniqueness of a lifestyle so different from the norm.

In commending this story I must fire one last nationalist arrow. No New Zealander has ever called ANZUK other than with the hard pronunciation “uck” . Surely “oook” is yet another Australian takeover of the English language!

I wonder, as did the author, how many present-day Australians have ever heard of ANZUK, the Australian, New Zealand and UK force based in Singapore? I suspect the answer is alarmingly few. Yet the period in which this force existed (1971 -1974) was a most important one in Australian history.

This was a time of nation state political tension (particularly between Singapore, Malaysia and Indonesia) and national policy upheaval. Great Britain signalled and implemented its withdrawal from ‘East of Suez’. The Australian political lead changed from Liberal to Labor and a range of defence-related departments were amalgamated as a Defence Department.

This book will redress this lack of knowledge about ANZUK. There is no doubt that most of those interested in this period will have their mind on the Vietnam War. It overshadows the concurrent defence involvement in ANZUK, in the Pacific Islands Regiment and the Southeast Asia Treaty Organisation.

Campbell traces the movements of the Commonwealth forces from Korea, their move to Malaya, then all the events through to the establishment of the ANZ Force in Singapore. The book goes on to describe how the ANZ Force became the ANZUK Force. He also explains the wider context and nuanced inter-relationships between SEATO, the Five Power Defence Arrangements (FPDA) and the Integrated Air (later Area) Defence System.

Pointing out the complexities of a combined and joint force, he examines HQ, Navy, Army, Air Force and the Support group. This is followed by information about the Lifestyle, Families, Sport and Recreation. ANZUK was a force of over 3000 Australian service personnel in a total force of over 6000. The author gives a comprehensive analysis of all segments of the organisation, unusually emphasising the importance of its ‘less glamorous’ supporting elements.

The book then records how and why Australia withdrew from ANZUK and its subsequent collapse before drawing conclusions. He does not touch on – or delicately avoids – the question of whether ANZUK undertook operational planning or the collection of supporting intelligence.

There does not appear to be a definitive history of SEATO or the FPDA: that makes this book even more valuable. This book is a key to the wider political and military understanding of Commonwealth and Australian involvement in a time of forward defence and deserves to be studied in detail, particularly by military planners.

Campbell notes that while ANZUK was not recognised as a peacekeeping mission, it kept the region’s peace. One can but agree!

Say something interesting about your business here.

Need help selecting a product or finding a sustainable option? Send us a message!